NOTE: Click on any of the photos for an enlarged view

My favorite knife in my collection is my Hinderer XM-18 3.5" knife. Several knives have come out over the years with similar attributes, using the Hinderer lockbar stabilizer, Ti side/G-10 side, heavy use blades, etc. but few have been patterned exclusively to somewhat mirror the XM-18 enough to be called a collaboration. Thus far only Gerber and now ZT carry those badges. I picked up the Gerber version a while back and promptly got rid of it. Unfortunately for Gerber  when you own the real XM-18, expectations are high and the Gerber fell very short. Well the same expectations unfortunately applied to the Zero Tolerance version. How did it stack up? Read on...

is made of 6AL4V titanium while the non-lock side is made from Textured G-10 with a thin stainless liner underneath (I'm guessing 420) . The blade is made of Crucible's "super steels" in S35VN; more on the blade later. The materials speak to the fact that this is a high quality, hard use knife, much like my XM-18. Very nice material specs on paper and one of the reasons I picked this knife up.

was BUTTERY SMOOTH opening and closing. There were no issues with the pivot screw turning while opening like I've had with a few of my other Ti frame locks. The screws were all nice and tight and nicely recessed. The Standoff's were some of the most substantial I've seen on a production knife. The clip was tight and there were no burs on any of the milled areas. The edges on the G-10 and Ti lock side are nicely beveled for comfort and all the jimping lines up with their counter parts. The one ding I have to throw out there on this knife was that it came as sharp out of the box as some of the butter knives I have in my kitchen. See video below:

Fortunately, a few strokes with my trusty Lansky Sharpening System

and it was hair splitting sharp. I have to say, S35VN is VERY easy to sharpen. Which kinda worried me as to it's toughness, more on that later...

I cannot stress how pleased I was/am with the lock up of this knife. It inspires as much confidence under heavy use as my Hinderer XM-18. It snaps open with authority and locks in place like a bank vault. The Hinderer lock bar stabilizer looks nice and adds the the "Hinderer look" to this knife. The lock -up on this knife, dare I say it, is as good as my Hinderer; absolute zero blade play in ANY direction.
BLADE:

As stated previously, the 3.5" S35VN blade is one of Crucible's "super steels" and it seems very easy to sharpen. The blade is extremely thick for a folding knife and in the hand inspires confidence as a hard use folder. Due to it's thickness, it's not as well suited as a delicate slicer as it is heavy duty but I have prepared food with it and it works well. Chris Reeve knives uses S35VN in many of their knives now and as any self respecting knife nut knows, Chris Reeve uses only top quality materials.  Still, I'd prefer a different steel in the blade as the steel on this blade has rolled slightly, under heavy use. Nothing bad mind you, just minor rolling in a couple of spots. To be fair, I was cutting very heavy Texas Ebony wood and very few steels stand up to this wood (CTS-XHP on the XM did) S35VN is classified as a stainless or corrosion resistant steel and I have had no issues thus far with rust. 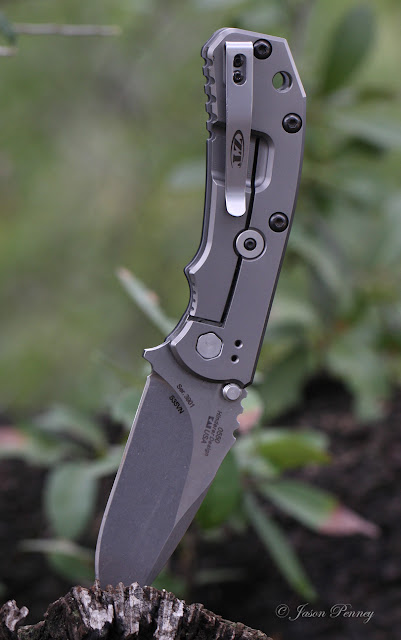 are very well done for such a big, hard use knife. This is my third Zero Tolerance knife and like the other two before this one, it is built like a tank! Unlike the ZT 0200

that I had before however, this one carries very nicely in the pocket with very little pocket hog issues. The beveled edges on both the Ti side and G-10 side makes for a comfortable knife under use. It fills the hand nicely when open and is EASY to open and close one handed. VERY nicely done ZT.

is a slightly heavy 5.8 ounces. The weight is very good however considering how heavy duty this knife is and it carries well in shorts or jeans. The open length is 8.125 inches and thus like any larger sized knives, must be opened around sheeple with some sense of  it's size. For those of us with a little common sense however and not scared of our shadows, this knife is a very nice size, substantial enough for many EDC tasks AND many heavy duty uses. The closed length of this knife is comfortable 4.625 inches and fits nicely in the pocket.
SMOOTHNESS OF OPENING:

To tell you the truth, after reading about a few detent issues with the generation one ZT 0550

from some owners, I was a little concerned and half expected it to be little tough to open when I received it. Once I opened the box however and flicked it open, a smile quickly developed. This thing reminds me so much of my Hinderer flicking it open. I literally mumbled, "WOW" the first time I opened it. ZT has either addressed the detent issue with the second generation or some owners are smoking crack. This thing is smooth! For a knife of it's size and heft, I could not see any knife opening any smoother. This thing flicks with almost the ease of a lighter weight Spyderco; the kings of flickers. Very well done Zero Tolerance.

LOOKS AND UPDATES FROM THE SERIES ONE:

came out, I was impressed with it's materials but due to three things, I held off from buying one. One, I thought the G-10 scales were about as ugly as any G-10 scales that I'd seen on a knife; unfortunately, I still feel that way. Fortunately, apparently Rick Hinderer and host of other folks realize this and have offered aftermarket scales that can remedy the ugly scale issue. I'll be purchasing one of the aforementioned aftermarket scales soon. The second thing I wasn't particularly a fan of was the Ti side lock look. For one, they put the cut out towards the inside so it didn't resemble my favorite XM-18. Fortunately, with the second generation, they remedied this and now the Ti side looks very similar to my XM-18. Lastly, I was never really a fan of the pocket clip on the ZT 0200 and ZT 0301

. It was too short, too stiff and rode to high in the pocket. This was also the case on the first generation ZT 0550

. Fortunately, the owners of ZT interact on the various knife forums with end users. They listened and even remedied this issue. The pocket clip on this knife is as close to perfect as any clip on any knife I own. The second generation ZT 0550 is a definite improvement in my book!
USES:

is classified as a heavy use folder, it has served me well thus far as a EDC folder. I have prepped food with it, used it for every day tasks but I have also whittled and carved with it. I tried to peel an apple and while I accomplished it, it was a little awkward. For a Police officer or someone in the military, the ZT is one seriously bad a$$ knife. I've carried it on duty and it carries well albeit a little heavier than my regular every day duty carry, my Spyderco Endura 4. Then again, the ZT is designed for heavier use. The ZT 0550

would work great as a camp knife, hiking knife, and as a job site hard use knife. I think it's only limitation would be delicate jobs such as (like I stated) peeling apples :).

I don't usually include a section in my reviews regarding Warranty issues and customer service but KAI / Kershaw / Zero Tolerance deserves a mention on this subject. Two things stand out about this company in this regard; one, Zero Tolerance is made in the United States by craftsmen at their factory in Oregon. Second, Kershaw and Zero Tolerance have EARNED a reputation in the industry for their rock solid customer service and warranty. In short, it does not get any better that I know of within the knife world. Purchase a Kershaw or Zero Tolerance knife and you have bought a knife from a company that stands behind their product. Nothing else needs to be said....

So the question remains, is this as good as my Hinderer XM-18? Well, it comes close in my book. I like the blade steel much better on my XM, the scales looks MUCH better on the XM and the ergo's on the XM are a little better.  Other than that, I have to say, the ZT 0550 is one hell of a good knife for under $200. Given, it's never going to be as collectable as the Hinderer XM but if you're buying a knife to use it's pretty close for the price. I think I would have preferred that ZT would have remained with their Elmax that they had on their ZT 0551

but this steel seems to work fairly well for most purposes. So should you purchase a 0550 when you save up $200 or hold off, save some more and wait to get the Hinderer? While I'm a knife user, I also like to own the best quality money can buy. The Hinderer XM-18 is at the very top of the quality scale by any measure. The ZT 0550 is NEAR the top of that same scale. If you collect or plan to collect knives that hold their value (or even rise in value) wait and get the Hinderer; I would never part with mine. If you're buying a knife strictly for using it, you won't miss a whole lot buying the  ZT 0550.

In case you haven't figured it out, I REALLY like this knife. In fact, I'm considering buying another as a back up. The knife is just that dang good. As far as production knives go, I have not found many that I like better than the ZT 0550. I buy and sell knives fairly regularly and sell the one's that don't live up to their billing or just plain don't work for me. This one does and I'll be keeping it. Lastly, this knife is made right here in the good old US of A and that counts for a lot in my book! In short, if you are in the market for a heavy duty folder that carry's well in the pocket, one that will last you a life time, look no further, you have found it in the ZT 0550

to put through the paces...must save more money :) 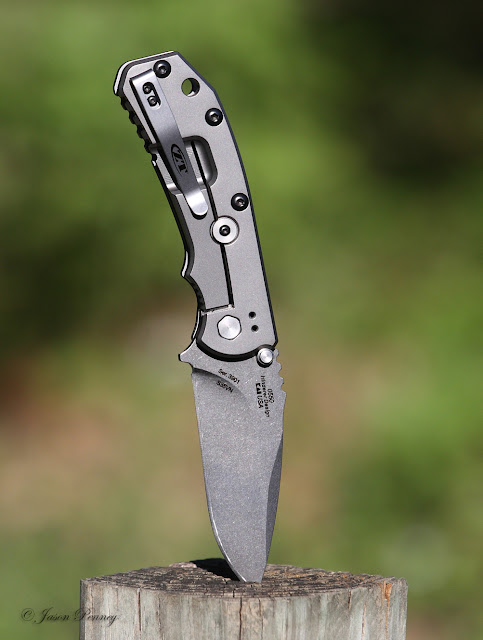